Massive change is coming to America.

For the past 50 years, America’s dominated position went unchecked. Our military and economic superiority gave us influence everywhere. American citizens could travel where ever they wanted. Nations sold their oil in our currency. People loved our movies. Football, that never caught on.

But that all changes with the rise of China and it’s time for America to buckle up.

Luckily, it seems we’ve been given seat belts.

Be cautious about putting too much faith or fear in elected individuals.

That’s a quote from Edward Snowden and something to keep in mind as the November 2020 election rolls in. It’s going to be a shit show. That’s all I have to say for now.

One reason we have so many dirtbags in office is that it’s really easy to fund someone’s campaign and keep it a secret. There’s a great documentary on this subject called Dark Money.

Ever wonder how Congress uses the internet? Explore nearly 5,000 connections between the 100 Senators of the 116th congress on Twitter.

I don’t care who does the electing, as long as I get to do the nominating.

Lawrence Lessig is a good man to listen to. He created the Creative Commons license and gave some good TED talks.

The Corona virus forced many schools to close and go online. From kindergarten to college, many students now sit in front of a computer instead of a teacher. We can’t hide the fact that our schools suck any longer. It’s so bad the only we either give up on America, or we take risks and fix it.

The dirtbags we elected to run things are not helping. Even Federal Reserve Chairman Janet Yellen agrees.

Be cautious about putting too much faith or fear in elected individuals.

The American economy is out of balance.

This time it’s not just our current situtation, it’s the whole system. How we react to this will decide the fate of America. We need high quality discourse happening in public.

Capitalism and Communism which briefly resembled victor and vanquished, increasingly look more like Thelma and Louise; a tragic couple sent over the edge by forces beyond their control. What comes next is anyone’s guess and the world hangs in the balance.

I like this quote because the image of a car driving off a cliff is what comes to mind when I see the graph below of how much money we print. 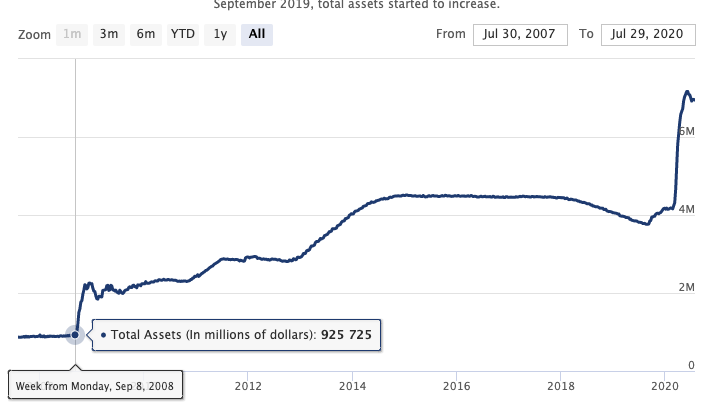 It seems like something big is coming to the dollar. Lets review the most recent big changes.

Wealth is not money. Wealth is your ability to generate money. Jeff Bezos does not have $100 billion dollars. People who claim he can solve world hunger are misinformed.